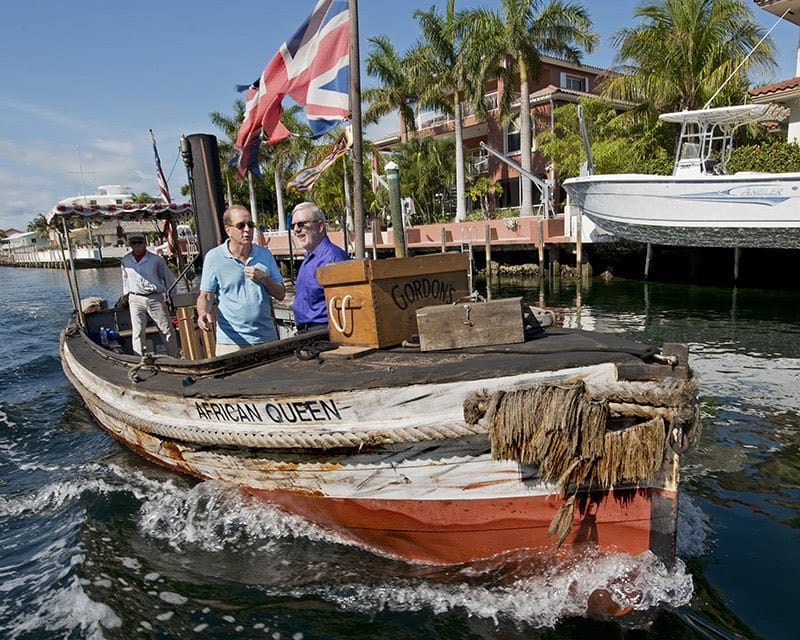 The famous steamboat the African Queen is located in Key Largo Florida. Made famous in the 1951 movie of the same name starring Humphrey Bogart and Katherine Hepburn she still remains a timeless classic. This iconic vessel is docked at the Marina Del Mar marina which is part of the Holiday Inn Complex at mile marker 100 in Key Largo and is available for daily canal cruises in the beautiful Port Largo Canal area and also for private events. Get comfortable and watch her steam pressure build to take you on a sightseeing cruise along the Port Largo Canals to the ocean where you will about turn and head back. Ask the Captain for a turn at the helm and enjoy her whistle blowing along the way.

1.5 Hour cruise that departs from the Marina Del Mar and travels down the Port Largo Canals to the Atlantic Ocean before turning around to return.

HISTORY OF A CLASSIC 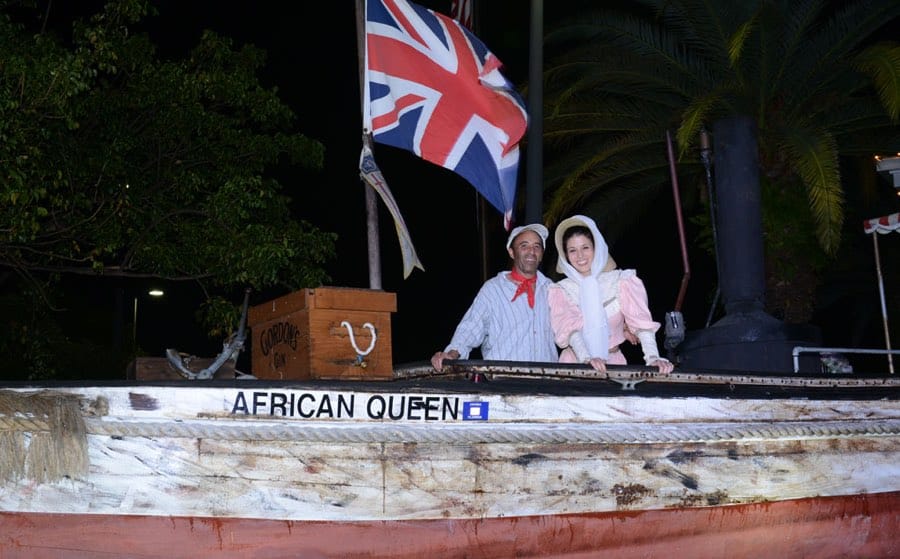 1912 - The african Queen was built in 1912 at Lytham shipbuilding in England. Originally she was named the S/L Livingstone She was immediately shipped to the British East Africa Railways company on the Victoria Nile and Lake Albert. Lake Albert is located on the border of the Belgian Congo and Uganda. She was built in a narrow way to navigate this river and was used to carry mercenaries, missionaries, cargo and hunting parties on their voyages.

1951 - John Huston saw the vessel and commissioned her for the movie he was directing “The African Queen” She was renamed after her starring role.

1968 - The vessel was purchased by a restaurant owner in San Fransisco and brought to the US for charter operation.

1970 - A man called Hal Bailey from Oregon purchased the boat for the price of her boat yard bill and took her to Oregon for charter operation which was so successful he decided to bring her to Florida for year round charter operation.

1982 - In 1982, late attorney (and Bogart buff) Jim Hendricks, Sr., discovered the vessel languishing in an Ocala, Fla., cow pasture and purchased the piece of movie history for a reported $65,000. An equal amount of funds was invested to get the boat operational and Hendricks began offering visitors rides in 1983 while the vessel was homeported at Key Largo’s Holiday Inn.
Among the vessel’s highlights outside of the Florida Keys, Hendricks shipped the African Queen to England for the Queen Mother’s 90th birthday celebration and for the commemoration of the 50th anniversary of the Battle of Dunkirk evacuation in the English Channel. It also visited Sydney Australia, New York and Ireland.
In 2001, the African Queen’s engine broke, yet it remained on display for curious tourists and film buffs to view.
2012 - Captain Lance and Suzanne Holmquist signed a long-term lease with Jim Hendricks’ son to restore the vessel in time for her centennial year celebrations. The Holmquists have overseen repairs and have taken pains to date it as it appeared in the film, replacing steel in the hull, replacing the boiler and oiling the black African mahogany to condition the wood. Once finished they put her back into operation as she once was offering canal and dinner cruises in Key Largo

In 1998 the American Film Institute ranked the African Queen as the 17th greatest movie of all time.

Humphrey Bogart won the only oscar of his career for this movie. In his acceptance speech he stated “its a long way from the Belgian Congo tpo the stage of this theatre. Its nicer to be here. Thank you very much”

The movie gave Katharine Hepburn her fifth Academy Award nomination. She said of the movie director John Huston “He told me to base my character of Rosie on Eleanor Roosevelt when she visited the hospitals of the wounded soldiers, always with a smile on her face. Since I as Rosie was the sister of a minister my approach to everyone and everything had to be full of hope, a smile” It was the best piece of direction I had ever heard.

To show her disgust with the amount of alcohol that John Huston and Humphrey Bogart consumed during filming, Katharine Hepburn drank only water. As a result, she suffered a severe bout of dysentery. Just about everyone in the film crew came down with dysentery except Bogart and Huston. Bogart explained ‘all we ate was baked beans, canned asparagus and drank Scotch Whiskey. Whenever a fly bit me or Huston it dropped dead”

Because the boat used in the film was too small to carry cameras and equipment, portions of the boat were reproduced on a large raft, in order to shoot close-ups of Humphrey Bogart and Katharine Hepburn. Interior and water-tank scenes were filmed in London, as were most of the scenes containing secondary characters.

Walt Disney used this film as the basis for the Disneyland's "Jungle Cruise" attraction.

In "The Making of 'The African Queen,' or How I Went to Africa with Bogie, Bacall and Huston and Almost Lost My Mind", Katharine Hepburn described the first day of shooting. Five cars and trucks were needed to take the cast, crew and equipment 3.5 miles from Biondo to the Ruiki river. There, they loaded everything onto boats and sailed another 2.5 miles to the shooting location. Press materials and contemporary articles detailed the perils of shooting on location in Africa, including dysentery, malaria, contaminated drinking water, and several close brushes with wild animals and poisonous snakes. Most of the cast and crew were sick for much of the filming. In a February 1952 New York Times article, John Huston said he hired local natives to help the crew, but many would not show up for fear that the filmmakers were cannibals.

According to United Artists press materials and John Huston’s autobiography, the director built a camp to house the cast and crew in Biondo, outside the town of Stanleyville. It included a bar, a restaurant and several one-room bungalows.

Berlin's film trade union requested that he African Queen be withdrawn from the Berlin Film Festival because of its "anti-German tendencies". 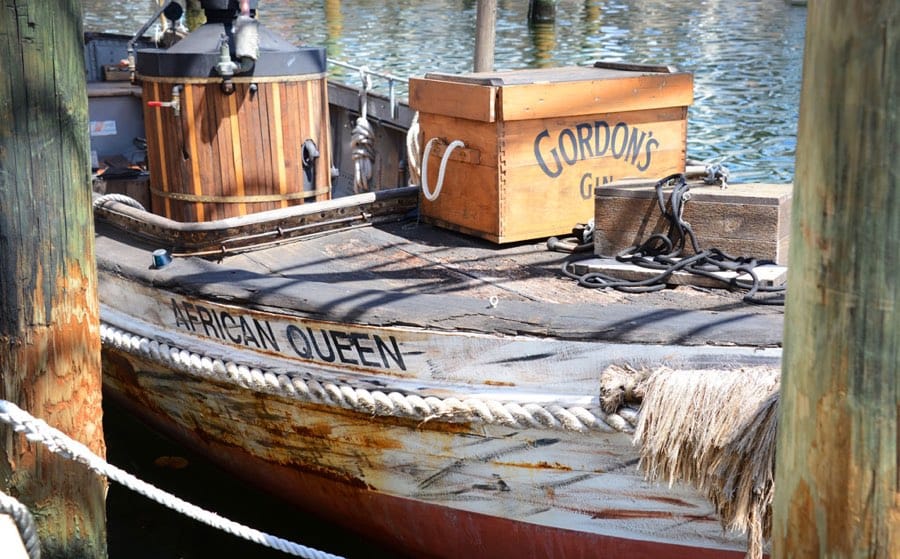 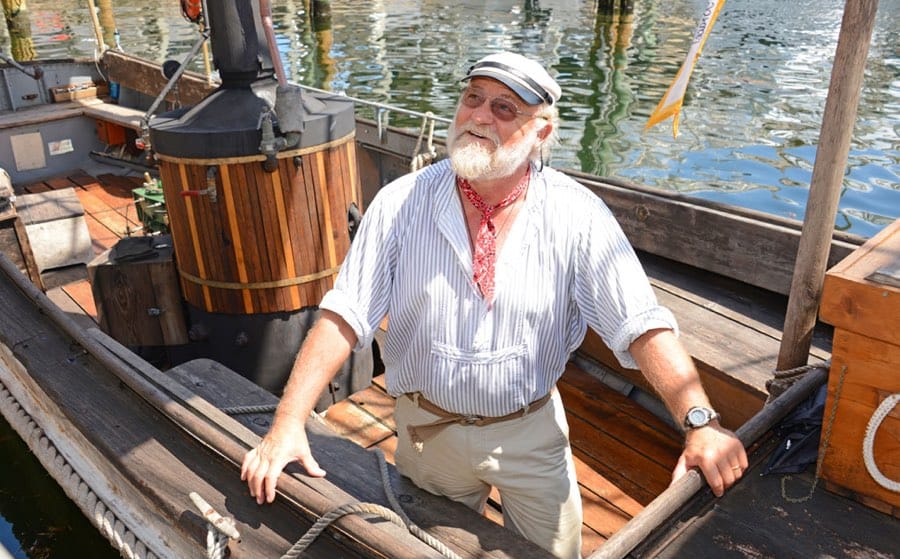 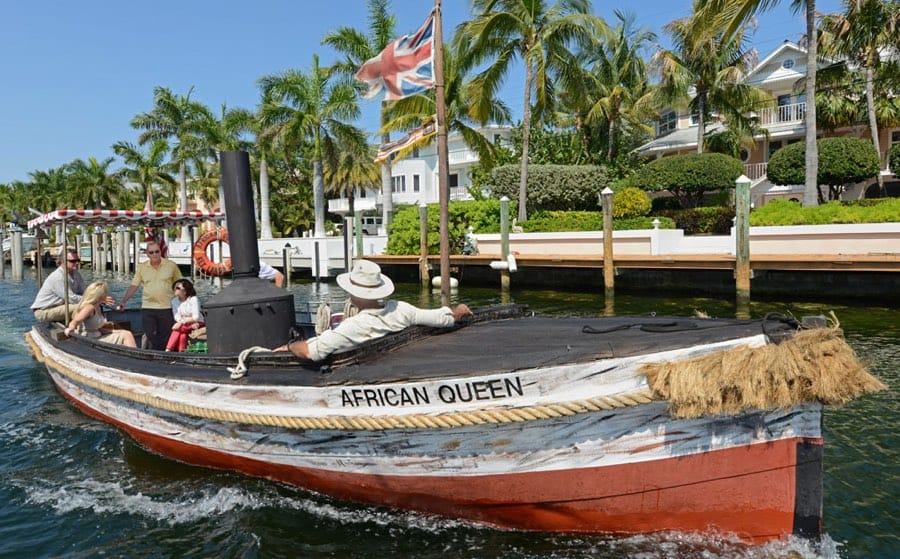 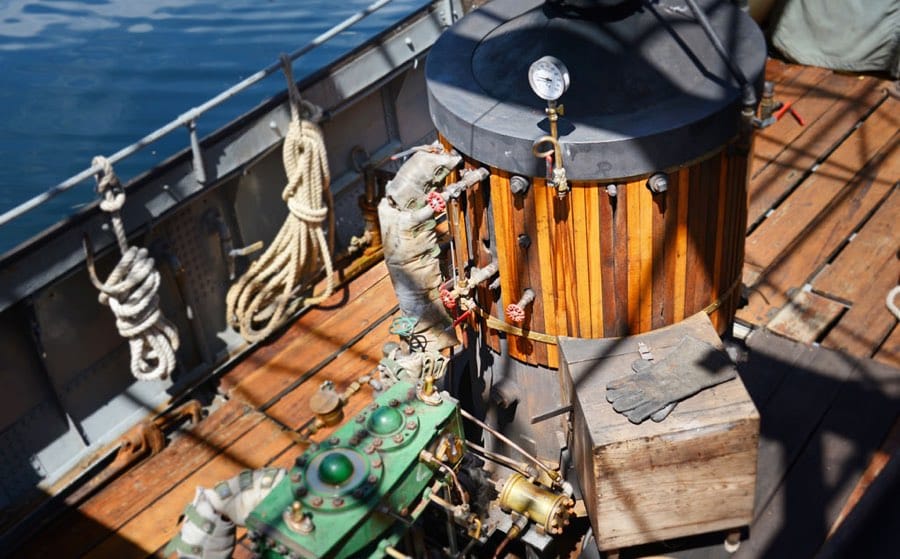 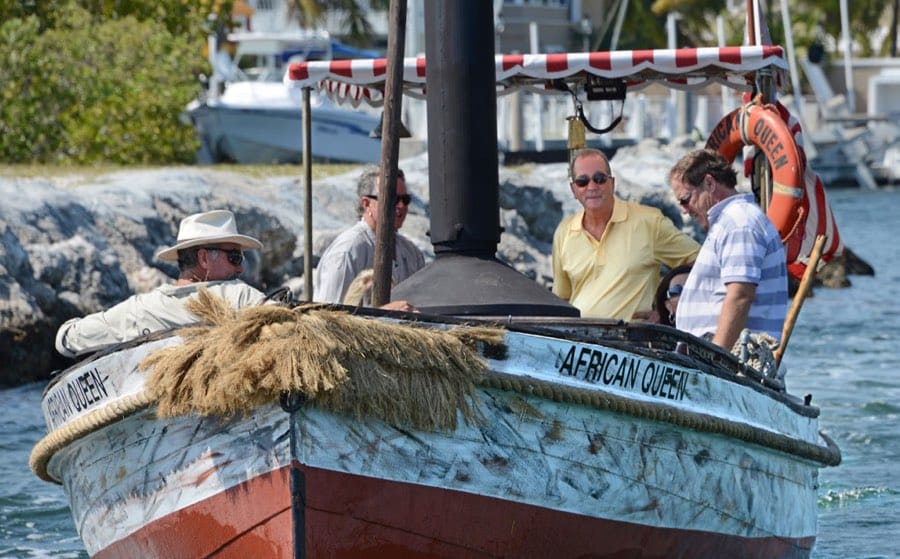 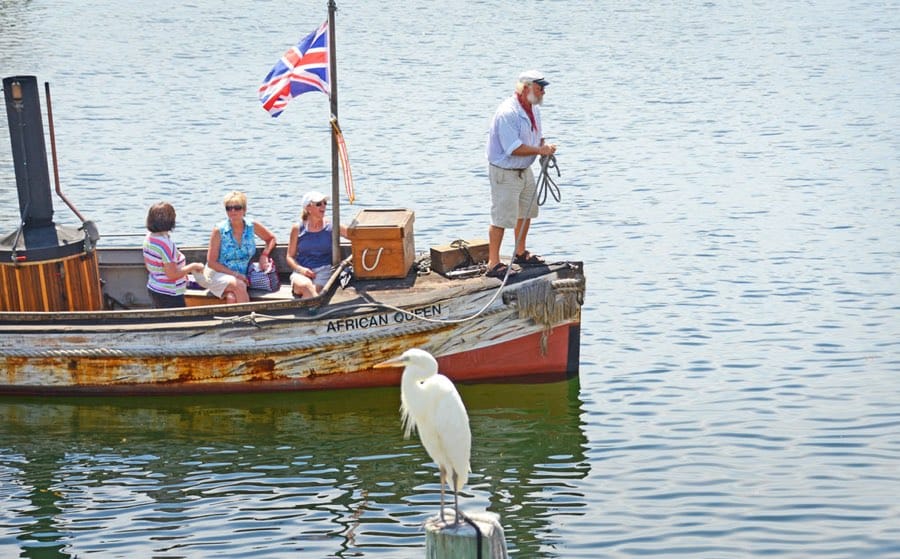 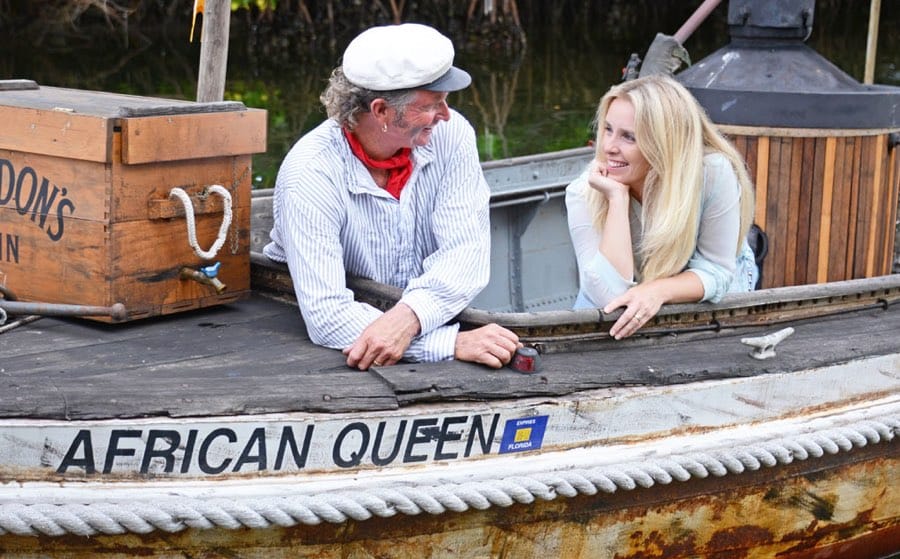 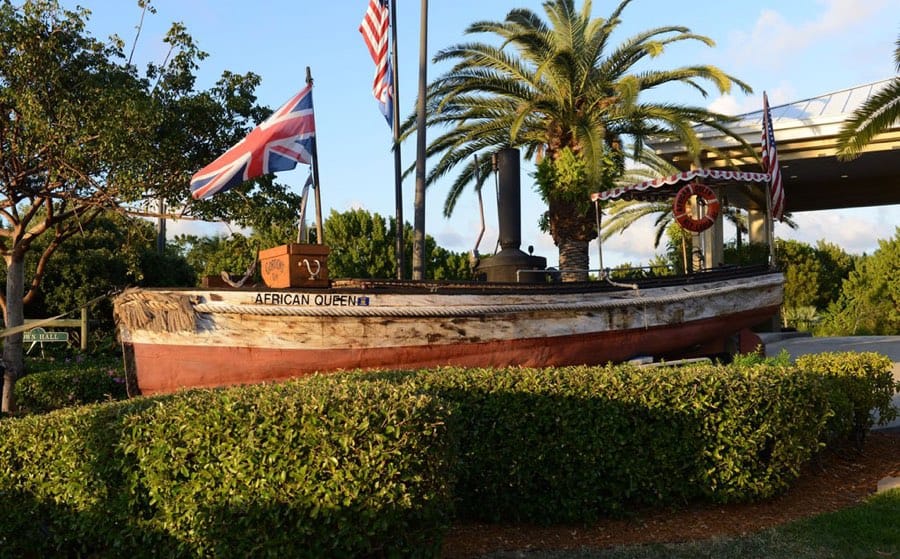 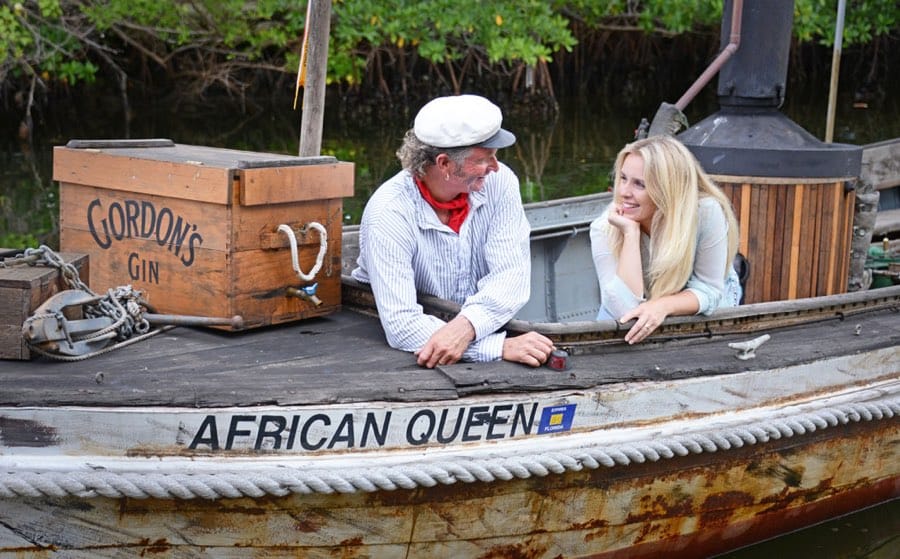 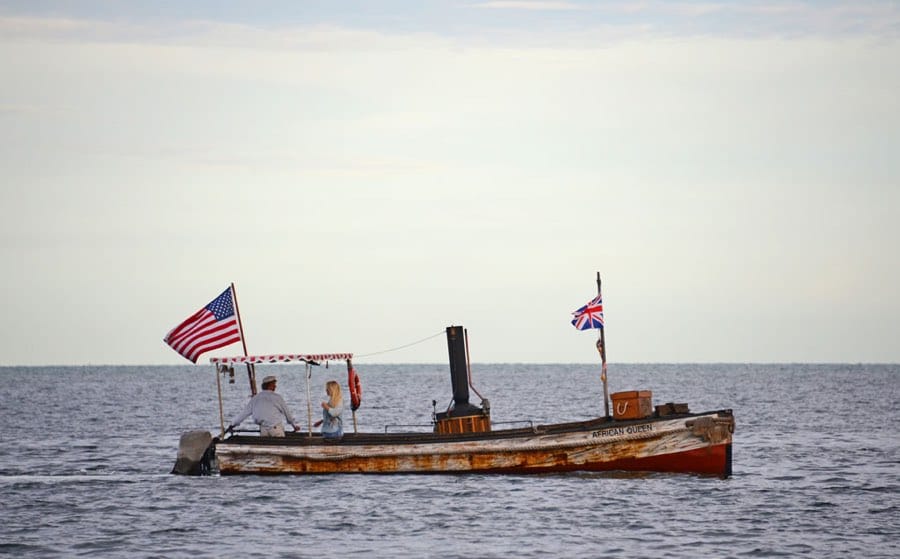 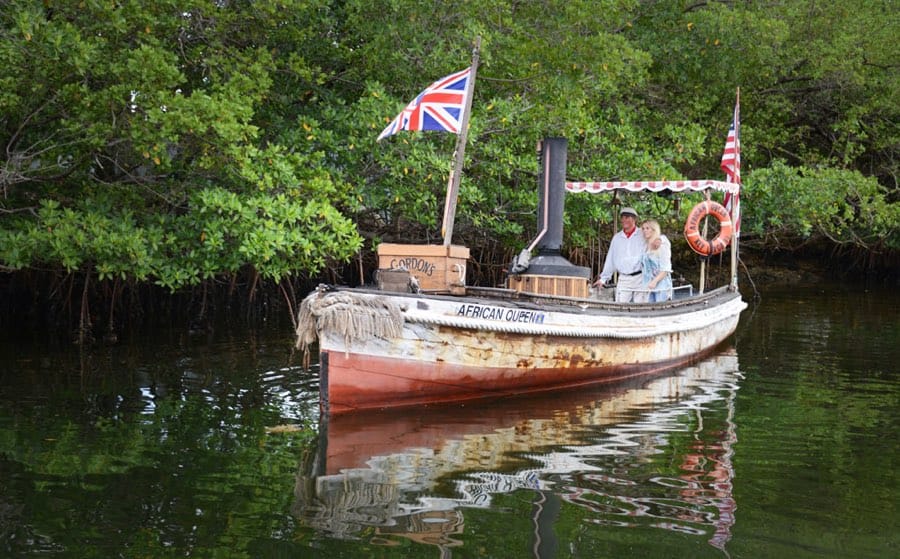 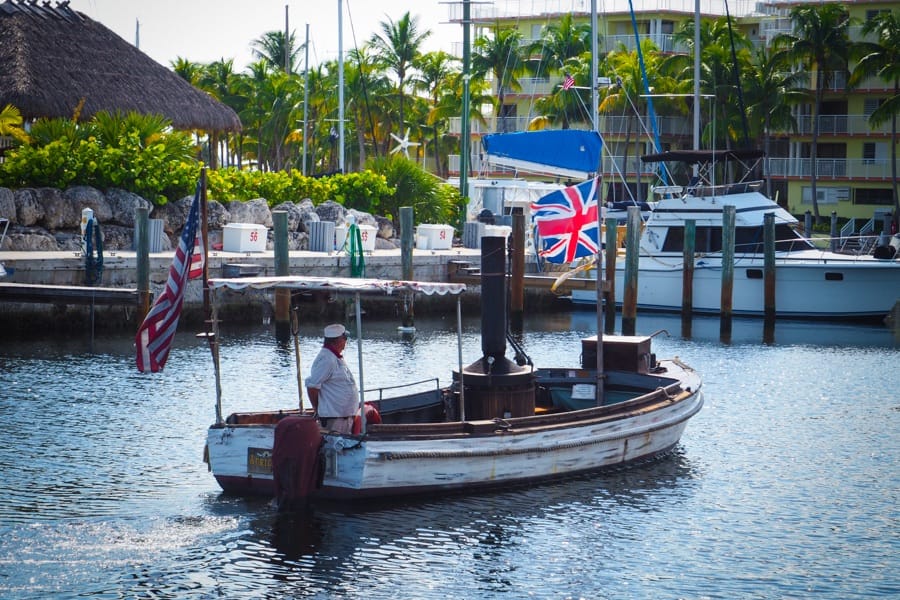 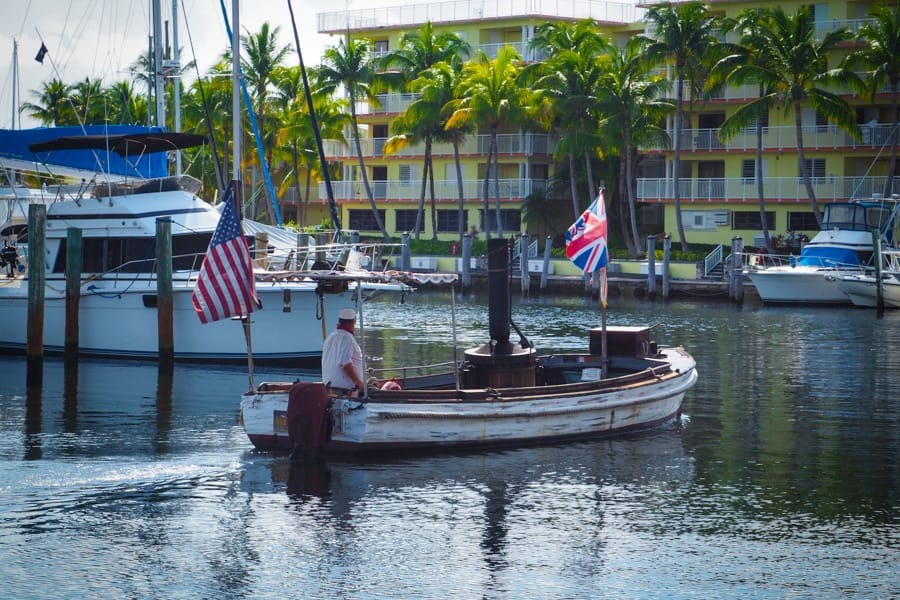 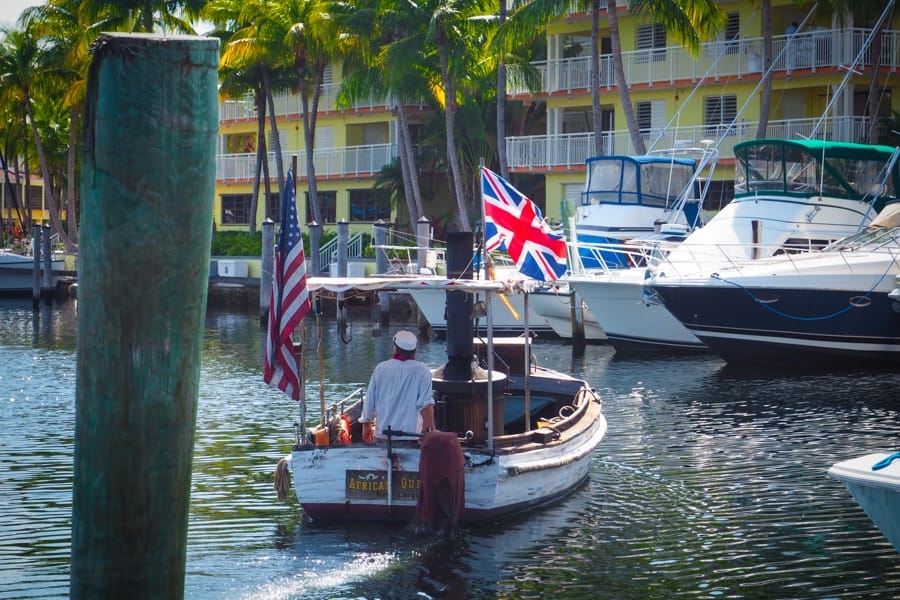 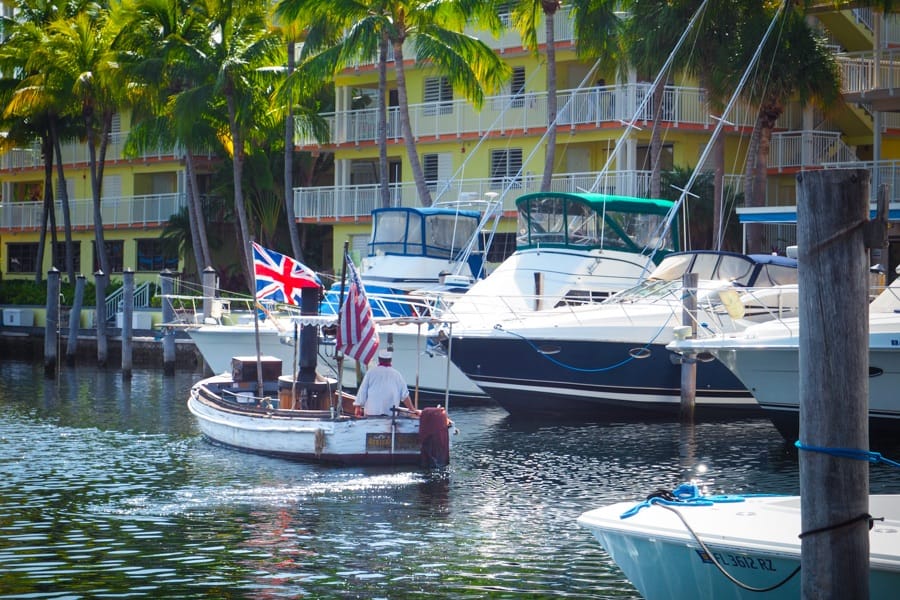 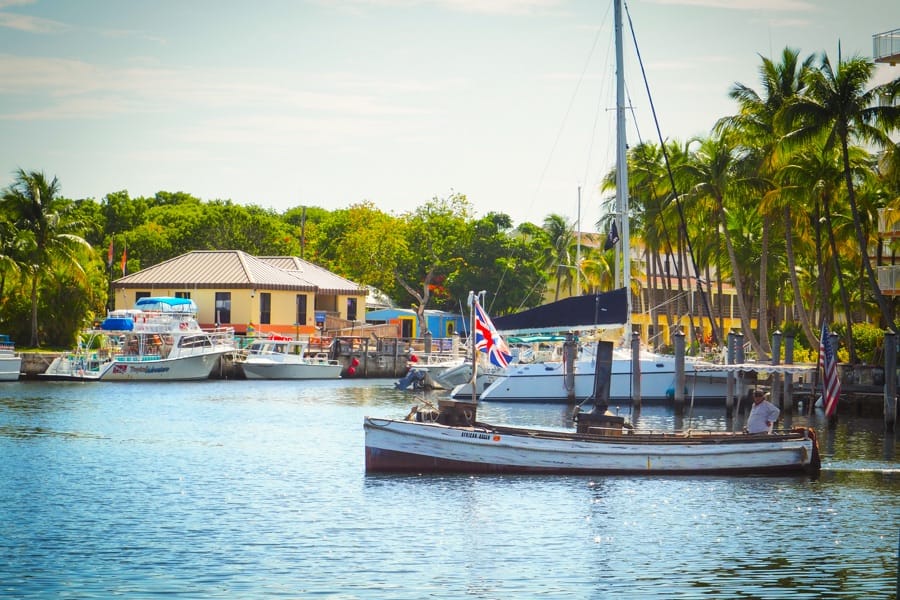 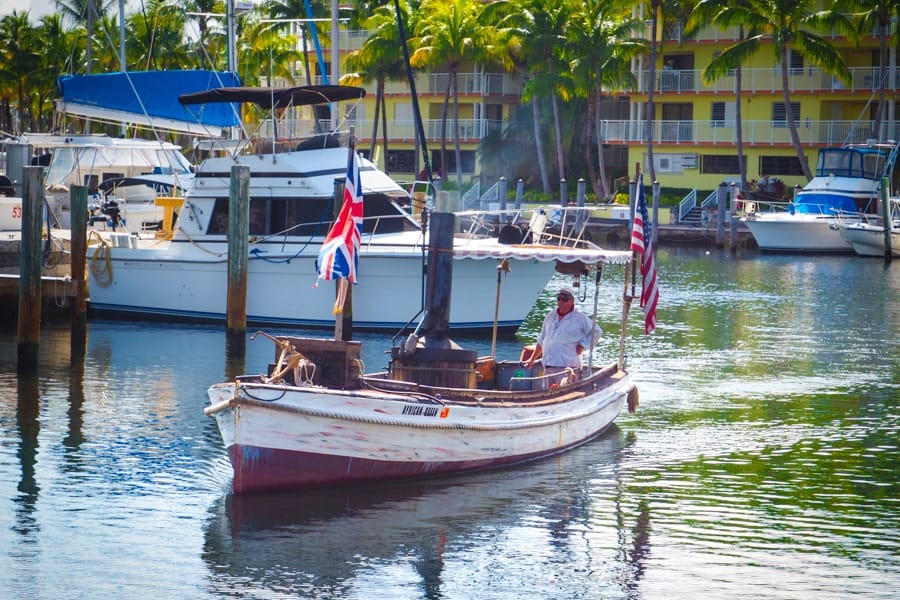 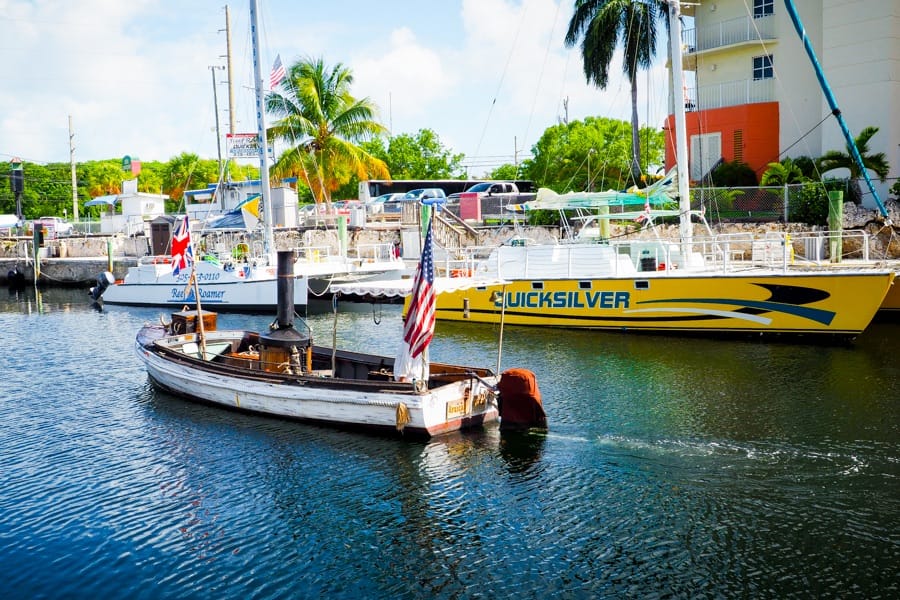 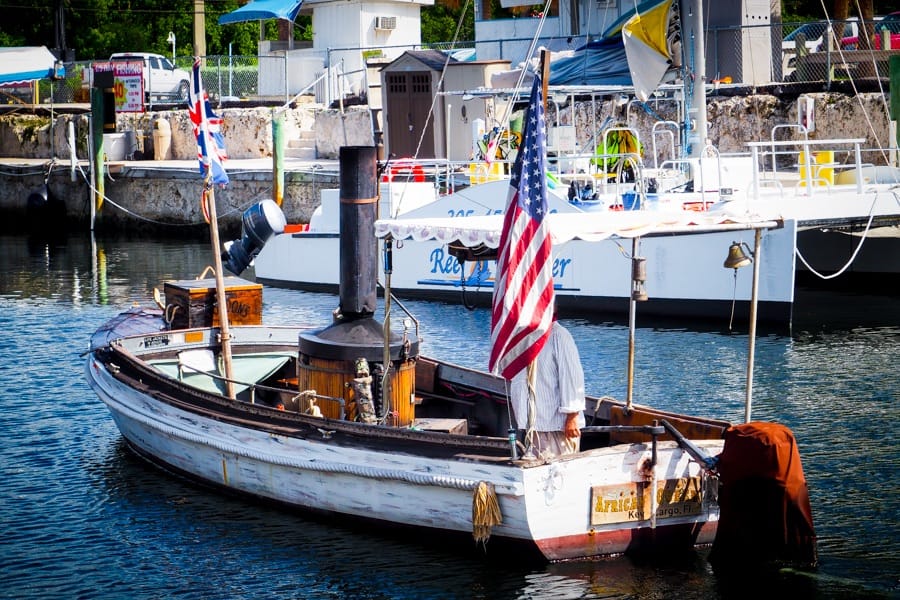